“A learning disability is not an illness.” Bringing the Mental Health Act up to date at the Generate Voices Forum 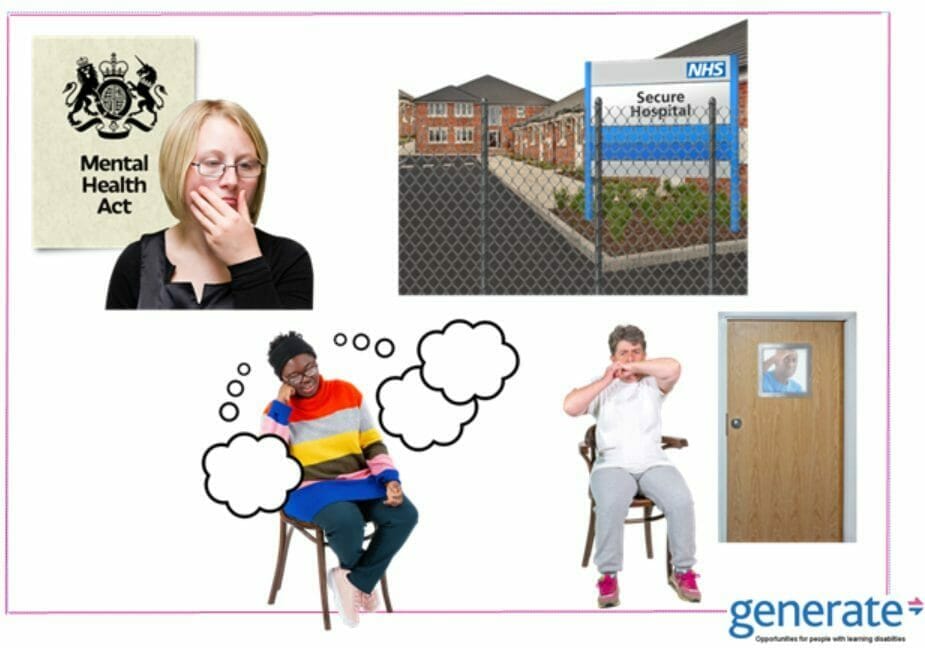 The Mental Health Act was originally created in 1983. The Mental Health Act is the main piece of legislation that covers the assessment, treatment and rights of people with a mental health disorder. The act was created so that those who have mental illness and present a risk to themselves can be sectioned, for their protection and the protection of others. Under the act, people can therefore be detained or hospitalized voluntarily and involuntarily. This means that people may be forced to go to hospital, even if they don’t want to. Once they are hospitalized, people are not allowed to leave.

Lindsey and Kate joined us to talk about the problems with the act and to hear about the changes that need to be made so that the Mental Health Act can provide better care for people.

When asked about what they think of the Mental Health Act, B said that he didn’t think it was right yet at the same time it depends on whether someone hurt someone else. B continued that the Mental Health Act needs to be clear on what the reasons are for hospitalizing a person. “You cannot put someone in hospital just for having a learning disability,” said Terry. Luis also said that he would be worried that a person can be taken into a different system, which does not understand the needs of people with learning disabilities.

When asked about what changes need to be made, Terry said that each person should have the right to stay where they want, “somewhere happy to keep their mental health stable”. Terry continued that it would be better to be in a proper care home or at home with the proper care, to make sure that people feel safe. People who are detained need to have the right support for them. Luis continued that it is more relaxing at home and better to have someone come to your home.

Terry also added that he felt people need to be able to follow their own interests to stay safe and well. Tony also raised a key concern that people need to know how long they would be detained and be told a timeline when they are in hospital. At this point, Lindsey and Kate told the group that under the Mental Health Act people can be detained for up to 28 days in order to assess their needs. Terry was shocked at this, saying, “I would not like to be locked up and away from my hobbies for 28 days”. Terry continued that not being able to do the things that he enjoyed, such as go on his train stimulator, would make him sad and more upset.

This raises a key issue; mental and physical health are linked. People cannot be sectioned or forcibly removed from an environment where they are safe and expect their mental health to simultaneously improve. Every person’s mental health is different. We therefore need a system where people are supported whilst they are detained, where people are free to enjoy their hobbies and, most importantly, feel safe. Michelle added that people need to be consulted in choosing their own form of care and responses need to be shaped around the individual and around what can help them. She confirmed, these are things that all help to keep people well and healthy.

Next, Lindsey asked the Generate Voices members what things they think might help stop people from being admitted to hospital. Tony said that there should be drop-in centres for people to be able to easily access in times of need. Tony continued that there should be helplines with people that are trained and know how to treat people with learning disabilities. Michelle added that helpers need to have autism awareness and an awareness of other learning disabilities, so that they can provide the right care.

Luis said that people who are detained are made to be seen like criminals and that people need help and support, not be punished. Terry agreed that “violence comes from needs not being met”. Luis replied that it is worrying; not feeling in control and like you can protect yourself. Michelle also raised the issue that in hospital you do not have the same doctor. Michelle highlighted that it is more comfortable to see the same doctor and a familiar face, rather than a stranger who doesn’t know you. Luis agreed that communication needs to be better, and catered the needs of people with learning disabilities.

Terry added that there needs to be an effort to end the stigma against people with learning disabilities, to reduce the judgement and prejudice. Tony shared this view and said that people can easily put a label on others and that is it hard to see autism and understand it. Tony said that “it is a real worry that people don’t understand the difference between a learning disability and a mental health disorder”. He said that it might lead people to being labelled wrongly and given the incorrect diagnosis.

Tony continued to share his own experience, “when I was at school and had meltdowns to because of my autistic response to the school environment, I was misdiagnosed and mislabeled as being schizophrenic.” This highlights a fundamental problem that there isn’t enough awareness of learning disabilities, which can lead to some people being falsely diagnosed and receiving the wrong care. This can also lead to some individuals feeling even more isolated and alone.

Lindsey concluded the meeting by asking, what are important things to have to be happy? Terry said that people need to have good housing, a place to socialize and family breaks. Terry emphasized that everyone needs to have somewhere to have a break, especially when they are feeling upset. Luis agreed that we all need a break sometimes; “we all need to be able to enjoy our interests and pursue the things that make us happy”.

For the Generate Voices members, it is clear that the Mental Health Act does not work as well as it should, for patients or for their families. So much has changed since the act was put in place almost 40 years ago. We now understand a lot more about mental health and learning disabilities. The government must bring the Mental Health Act back up to date, with a better understanding and new practices of how we can best support people with learning disabilities.

By joining the survey with BILD, the members of the Generate Voices are able to use their experiences and voices to be a part of this much-needed change. The new act will hopefully ensure that people at placed at the centre of decisions about their own healthcare and that everyone is treated with respect, rather than discrimination. These changes are instrumental to help rewrite the wrong-doings of the past so that people in the future will no longer be unfairly detained or treated unequally. So people are properly protected when they are at their most vulnerable.