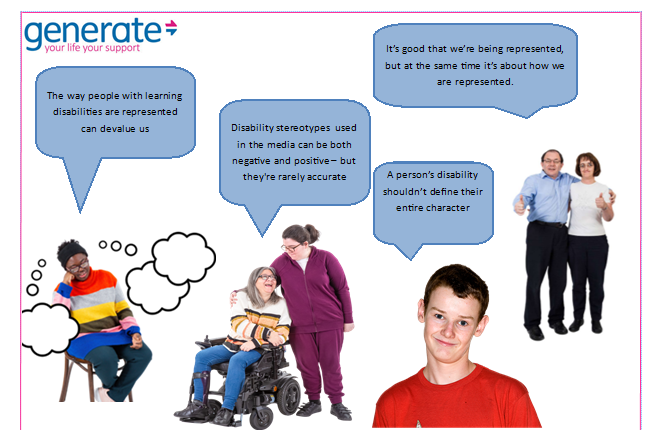 Can you think of any ways that people with disabilities are represented in the media?
“On Eastenders they have a deaf character and in Holby City there is a person with autism; they are funny, they are comedy acting,” said Nicholas. “I think the character is meant to be for fun, to lighten the mood.”

“I knew someone from secondary school who is an on and off actor,” said Tony. “He made an appearance on Holby City, playing a more severely disabled person.”

“That’s a pattern that is usually the case on films and TVs in general,” said Tony.

“Do you guys know the show the undateables?” asked Terry. “I understand that it helps people with disabilities go on dates and find love, but I feel like it’s designed to make you feel sorry for them.”

“Again, I’m in two minds,” said Leon. “The title, I think it’s offensive and hurtful. It’s putting people down. But, at the same time it does help people find relationships. It goes back to the point I was making earlier, it depends on how people are represented. It can be a good thing, but it can also cause harm as well.”

“That’s one of the barriers that we need to address,” said Leon. “Just because we are unique it does not mean that we should be overlooked or excluded. There needs to be more representation in the media than there is now. The way people with learning disabilities are represented can devalue us. That is something that needs to change. Even though there is some representation, we are represented in the wrong way and it can lead to us being persecuted more in public. If we don’t do something about it now, it will never change. It needs to be addressed; something needs to be done about it.”

“I agree, but I don’t think it’s bad,” said Nicholas. “Some people are well represented. There is Stephen Hawking who I saw on the TV and he was great.”

Do you think it’s fair for abled body people to play disabled characters?
“People are left out in society as people can’t be bothered to interact with them, there is a false understanding that people with disabilities are hard to work with,” said Nicholas. “That people don’t get the chance like they should.”

“One thing I will try and get across is that there needs to be more awareness. If we are aware of the spectrum of disabilities then why can’t we be aware of the diversity?” said Leon. “That’s something that I think about quite a lot: diversity. As far as non-disabled actors, even though they don’t have a disability they are still representing disabilities. It’s good as non-disabled people are starting to be aware; they’re helping us to tell our stories. Also, they’re showing that at the heart of it, we are all human and we all share the earth and need help educate and support one another.”

“Rosie Jones is a comedian, I think she’s great,” said Nicholas. “She’s also in Casualty, and she is playing a mother who neglects her child. I think it’s good that she’s in the show. But I don’t like the way she’s portrayed. It gives off a bad image. Disabled mothers are more than capable of looking after their children and showing the opposite of that can create a bad perception.”

“I think the way disabilities are represented on screen has come a long way,” said Tony. “Compared to years ago, it was always a negative representation. But I think there are still improvements that need to be made.”

The media has a long track record of using stereotypes to portray people with disabilities. These stereotypes can be both negative and positive – but either way, they’re rarely accurate. Although these days we’re seeing more realistic portrayals of people with a disability in the media, stereotypes are still all too common. This needs to change.

In the UK, there are around 1.5 million people who have a learning disability, yet the representation of these people falls short of where it should be. We see a variety of people every day in the real world, so why isn’t this reflected in the media? Having an accurate representation of people with learning disabilities and autistic people in the media is important; not only to demonstrate the diverse lives and interests of people, but also to raise awareness. The lives of people with learning disabilities and autism are different, diverse and unique. Rather than pigeon-hole these contrasting identities, the media should celebrate them. At the Generate Voices Forum, we must continue to push for better representation and allow those who have disabilities to play disabled roles that reflect the reality of living with a disability.

Make a difference, become a volunteer!