Make a difference, become a volunteer! 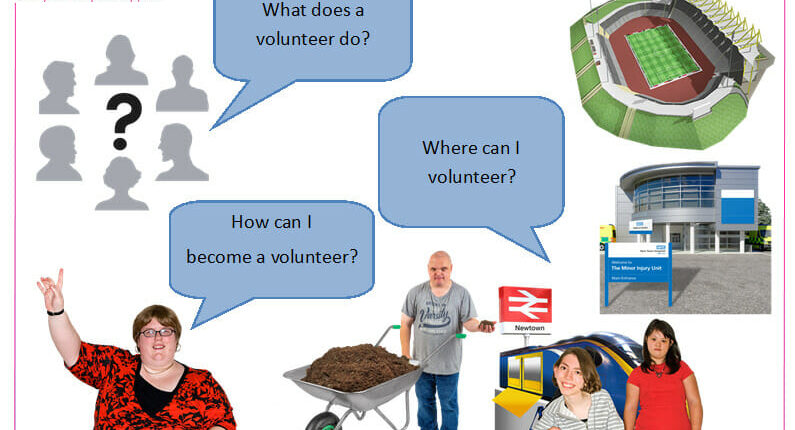 At the Generate Voices Forum, the group were recently joined by Jake and Terry to talk about their new roles at Generate as Volunteer Coordinators. Volunteering can make a real difference, not only to the volunteer’s own life but to also the lives of those around them. There are loads of ways to get involved, with Jake and Terry being here to help Generate members find their dream role. So, how do you go about finding the right volunteering role for you? Here, Jake and Terry explain how they are here to help.

What is a volunteer?

Before getting into the details of where to volunteer and what you would do, it is first necessary to clarify what is a volunteer. Terry began by asking Generate Voices members what they think a volunteer is.

“Volunteering is where you help people, but you don’t expect them to give you money,” said Joanne.

“Exactly,” said Terry. “Volunteering means to give. Your time, your skills or your service, all free of charge.”

Volunteering or becoming a volunteer means that you are offering something (your time or your skills for example). This is ‘something’ that is not required nor an obligation. As Terry explained, volunteers don’t work to earn money or recognition. So, why do people volunteer?

“I think people volunteer to help people and to make a difference,” said Nicholas.

Michelle is right. Most of the time, to volunteer means working side by side with others. This connects a volunteer to other human beings as they are working toward a common goal. Becoming a volunteer means becoming more connected with the community.

John then shared his experience.

“I once volunteered at Fulham Football Stadium,” he said. “I did it because I’m a supporter of the football team. I really enjoyed it. It was good to be in the stadium and helping the team.”

Terry explained that there are many reasons why people decide to become a volunteer. Other reasons include:

To gain new skills and experiences.

It looks good on a CV.

As a way to get to know the community.

As a pathway to gain employment.

To build confidence and self-esteem.

Volunteering is so much more than just working for free. When people volunteer, they are helping. Therefore, for volunteers their time is well-spent. For many people, by volunteering, they may believe that they are capable of inciting change and making progress. In some way, however large or small, a volunteer is capable of doing good. Therefore, social responsibility is often a driving force when it comes to volunteerism.

Where can you volunteer?

People can volunteer almost anywhere in London. Terry explained that there are probably more places than you think where you can volunteer. When volunteering it is important that you volunteer somewhere that you care about or that you are interested in.

Terry can some examples of places that welcome volunteers in London, for example, the London Transport Museum in Covent Garden, ZSL London Zoo in Regents Park, Deen City Farm in South Wimbledon, St Georges University Hospital in Tooting or even a sports event at Arena’s like Wembly or the O2.

“I know someone who volunteered at a football stadium,” said Paul.

“Exactly, it can be absolutely anywhere!” said Terry.

This mean volunteering gives you the chance to try something new, build on your existing interests and also gain invaluable experience and skills.

“I volunteer for the Merchant Navy Locomotive Preservation Society Ltd at Stewarts Lane Train Depot in Battersea, London, not far from where I live,” said Terry.

“I help clean and maintain Merchant Navy Class Pacific No 35028 Clan Line. I make sure that the famous London engine is ready for Railtours with The Belmond British Pullman train that operates out of London Victoria Station. Sometimes the locomotive hauls other trains out of London and round the National Network in the United Kingdom.”

“I work mostly at weekends on a Friday, Saturday or Sunday depends on what day I am needed,” said Terry.

“What I gain from volunteering with Stewards Lane is that I sometimes get the chance to shovel coal on the fire when on the footplate assisting someone also on invitation. This is something that I really enjoy, and that not many people are able to do! I also go out with the locomotive on a Railtour in the support coach as a guest to experience to see what it is like riding behind Clan Line at speed with a main line express.”

For Terry, volunteering for Stewards Lane means that he can do something that he loves. Volunteering also means that Terry is able to work with people who are also passionate about locomotives and share his interest. Through volunteering, Terry is also able to get involved with activities that most people aren’t able, such as shoveling coal or taking trips with Clan Line.

How to get involved?

As the new Volunteer Coordinators, Jake and Terry are here to make it easy for all Generate members to become a volunteer.

To get involved, first it is important to find a passion or something you are interested in. Next, it is important to consider your skills or talents and how best you can help. Finally, speak to Terry and Jake. They already have lots of contacts with interesting organisations around London and are there to help you find the right place to volunteer. Even if you are not sure of your skills or what to do, Terry and Jake are here to help every step of the way, so that everyone can volunteer for a cause that they love.

For more information, please have a look on our Supported Volunteering webpage, here.

Or, to get in touch with Jake and Terry please email them at: