Taking off our masks with Kieran Rose 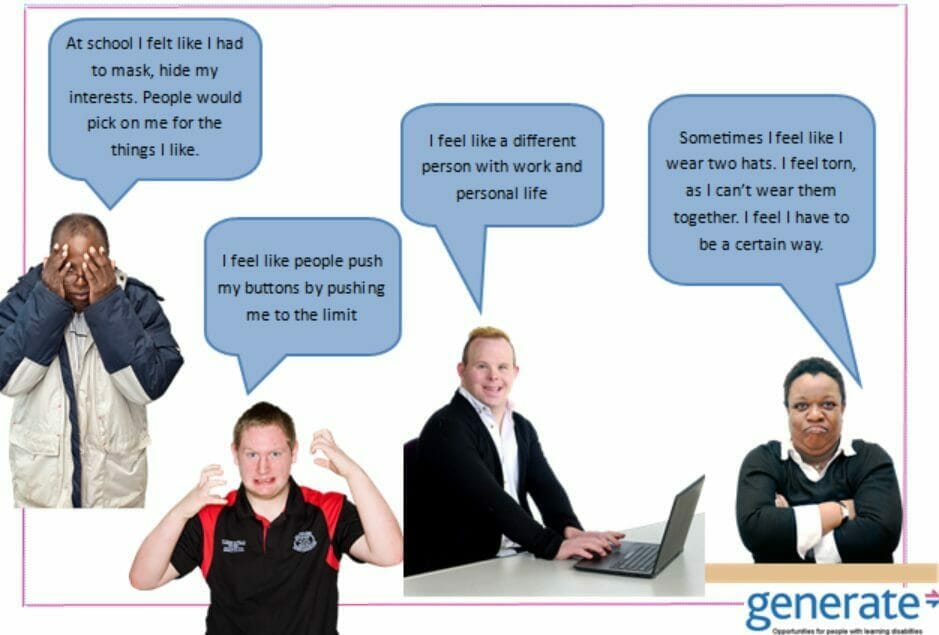 Kieran joined us at the Generate Voices forum to talk to Generate members about their own experiences of autistic masking. Read the conversation below to hear what Generate Voices members had to say.

“Autistic masking, it might be something you have experienced, maybe not” said Kieran, “Does anyone know what it is?”

“It’s a human thing,” said Kieran. “It’s when we act differently around different people, and it goes deeper than that.”

Kieran explained that masking can begin at a young age, through different experiences. From birth, autistic people begin showing issues that are minimized. So when an autistic child gets upset or has a meltdown it is minimized. For example parents say “it’s nothing” or “stop making a fuss”. By having these responses drilled into autistic people over and over again, it sends a subconscious message to not listen to their bodies. Instead, they are encouraged to hide their autism.

“We have to hide our behaviors,” said Kieran. “We are told not to say certain things and act a certain way. This is because people don’t understand. People can also be quick to cut you off when you talk about your interests, this makes autistic people afraid to speak freely and afraid to share who they are. This also leads people to believe that meltdowns and bad behaviors are a bad thing.”

“Does anyone know what autistic burnout is?” asked Kieran.

“Me neither,” said Luis.

“When we are forced to mask and to not talk how we want to, it stops us from being ourselves,” said Kieran.

“This all leads autistic people to dissociate from society. Masking is exhausting; it uses a lot of energy. Using all this energy can make us tired a lead to autistic burnout. Autistic burnout can have a massive impact on mental health, due to the way people are treated,” said Kieran.

“There’s no such thing as normal,” said Luis.

“Even people that don’t have autism or a learning disability are not normal either,” said Michelle. “Everyone is different.”

“Yes, that’s true,” said Kieran. “But the problem is that autism is seen as some kind of abnormality.”

Autistic people are measured up against the perceived or accepted ‘normal’. But this is wrong. Everyone masks, people mask their race, culture, sexuality, many things as well as disabilities.

“Masking is about trying to help keep ourselves safe from being bullied and marginalized,” said Kieran. “Do you ever feel you have to change or mask?”

“I try not to worry about anyone else. I think about me,” said Luis. “But, I guess, I would change my behavior if I was pushed to.”

“At school I felt like I had to mask,” Terry said. “I like trains. People would pick on me for that. When I tried to explain to a teacher, they would tell me to ‘just ignore them’. But it’s hard when it’s so personal. It made me feel like I had to hide it and act differently. I can’t help that I like trains. But I felt that I had to push myself to do something else until I was alone.”

“People push your buttons by pushing you to the limit,” said Luis.

“It’s like people were trying to set my ‘bomb’ off, and I don’t want it to go off,” added Terry.

“I don’t know whether it’s masking,” she said. “But, certain situations where I’m in an awkward dilemma, I feel like have two hats. One hat is professional, one is non-professional. But there are conflicts with the hats and I can’t wear them both at the same time. I get told or feel I have to be a certain way. It’s nerve-wracking, I feel torn. I want to be non-professional in a professional environment. I don’t want to have to wear the professional hat all the time.”

“Yes,” said Tony. “You feel like a different person with work and personal life.”

“Masking is not just about how we act,” said Kieran. “There is an expectation; having to wear a school uniform or a work dress code. There is no choice not to.”

Kieran explained how lockdown made it especially difficult. The change from staying home all the time to now moving around a lot is hard.

“It feels as though I wear a mask when I am out, to hide my struggle,” said Kieran. “Everyone has been masking. We aren’t told about it. It has a negative impact on our lives but it is still not discussed.”

“No choice, we can’t show our authentic selves,” said Terry.

“That’s not right; we need to be able to get stuff off our chests,” said Luis.

“When people make us feel bad about who we are and how we think, we hide ourselves,” said Kieran.

We need to be aware of these masks and the negative implications they have. There is a misconception that autistic masking is about ‘fitting in’, but it is more than that. Autistic masking is a response to trauma and is directly related to stigma in society against autistic people. It is also a form of self-protection that can have long term negative effects, such as poor mental health.

If you enjoyed reading about our session please join our next Generate Voices forum so that you can have your voice heard!

Getting out and about: the Generate Voices forum talks to Transport for London

The good, the bad and the unacceptable – Generate Voices talks about social housing
Comments are closed.