The good, the bad and the unacceptable – Generate Voices talks about social housing

At our most recent Generate Voices forum, members decided they wanted to talk about social housing. The meeting was used as an open discussion. During the session each member had the chance to share their own experiences and listen to others. Some were good, some were bad and some were completely unacceptable. Below, have a read about what our members had to say.

B started the discussion by sharing his own experiences.

“I’m a member of Wandsworth Council, but they said they could not give me a home. It was a difficult time. I moved around a lot and wasn’t happy,” said B. “So, I went through transforming care to get a house. My new home is 5 minutes from my childhood home. But, it took me a long time to get here. I even spoke to my MP and they said there was nothing they could do. I only found out about transforming care through a friend.”

“Personally, I don’t have any experience with social housing,” said Terry. “I will eventually move out one day. At the moment I live with my mum. We live by the railway line. I like being able to watch the trains go by. I enjoy living here; it’s close to the things I like and my interests.”

Tony then shared his experiences.

“I left my childhood home in 2016. I left because of some difficult circumstances and I didn’t feel like I could stay,” said Tony. “Wandsworth Council found me some temporary accommodation in Croyden. I was grateful but it was not my choice. Due to an incident I moved out of Croyden into another temporary accommodation in Talmouth. This still wasn’t my choice. There were 8 rooms in the house and we all shared a kitchen. I had to be careful with who I spoke to, as some people were violent.  No one else in the house had autism or a learning disability.”

“In the end, I was there for 1 year,” said Tony. “I was eventually offered a flat in Battersea, but it was located next to a rough estate. I turned down the flat to protect my own safety. But I was told that this meant I was making myself ‘unintentionally homeless’. In order to get another flat I had to really ask the council again and again. It was stressful. In the end, I was offered a home in Tooting, but it took a long time. It took me 4 years to find my home.”

B said that, like Tony, it took him a long time to find his own home.

“I have stayed in a lot of crisis housing and have moved around a lot,” said B. “I have been in my forever home, which is my own house, for two years now. But, it has been a journey. In one year I moved 4 times.”

“I used to live in a council flat. I lived there for 16 and a half years,” said Michelle. “But, I moved because I have issues because of my health. I now live on the first floor. There’s no lift in my flat, only concrete stairs. I have epilepsy and in the past have had trouble with falling down the stairs. I worry that that could happen again. Sometimes when I am indoors I have trouble leaving.”

“About 4 years ago my health was getting worse,” said Michelle. “My support worker helped me fill out my transfer forms. My GP also wrote to the Council. I didn’t hear anything. It wasn’t until 6 months later that I heard back. Then some trouble came. I had lots of bad luck. The flat got flooded and I ended up having to stay in a Holiday Inn. My flat is owned by the Housing Association – they are the ones who are supposed to fix things. During the lockdown I found some mold behind the sink. But they said they couldn’t come because of the pandemic. This was back in January and they still haven’t come.”

“My partner Karen also doesn’t get much help. Her storage was a problem for a long time. They just don’t want to know. Sometimes it feels like the council doesn’t want to help her,” said Luis.

“I also live on a Housing Association,” said Tony. “I felt like I had to really push to get the help I need. But I was offered a lifelong tenancy. This relieves some of the stress, originally it was only meant to be 6 years.”

“Yes it is good having a permanent home. It means I can make community connections, be close to my family and get familiar with what’s around me,” said B.

Michelle then brought up another issue that she has come across.

“The last time I saw my housing officer was years ago,” said Michelle. “She’s supposed to come once a year to check on me and the flat. She can also be rude.”

“My housing officer was rude too, but I asked to change,” said B.

“I also have issues with my mobility scooter,” said Michelle. “I used to keep it outside my flat but was told it couldn’t be there. So, I tried to keep it in my flat instead, but it’s too small and would get in the way. Now, I have to keep it underground in the parking lot in a secure locked cage. But this means it takes me a while to go down and get it and also to come back upstairs. This limits the amount of times that I leave the house.”

Michelle also said that her partner, David, has trouble with his flat. David is scared of heights. Yet, his flat is located on the second floor. This makes David feel uncomfortable. He doesn’t like climbing the stairs, so he leaves the house as little as possible. Like Tony, David did not have a choice with where he lives.

“There shouldn’t be a battle to have a home, somewhere to be safe,” said Tony. “They don’t think about vulnerable people. There is a policy of take it or leave it.”

“We need to act together. Get the council to start caring,” said Terry. “It’s about more than just money and politics. There needs to be a choice.” 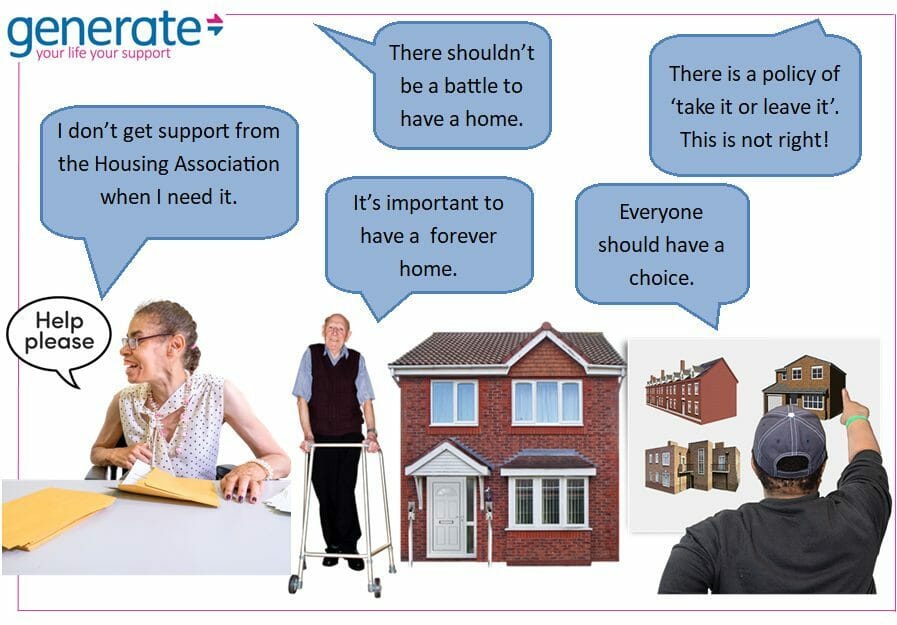 It’s clear that some changes and improvements need to be made with social housing. Whilst the social housing system does attempt to do what’s right by our community, there are some challenges for people with learning disabilities. As Tony said, people with learning disabilities and autistic people should have the choice of where they live. Terry also made the good point that a person’s home should be near their family and interests. B said how moving around a lot made him unhappy, anxious and unsettled. B also added that having a permanent home was important to gain a sense of belonging and become a part of his local community. Both B and Tony said that having a lifelong tenancy relieves a lot of stress and makes them happier.

What’s clear is that all members want a permanent, forever home. Most of all, everyone deserves to have their own stable home where they feel safe. The council and Housing Association should take these needs into consideration. Both Michelle and her partner David said how they feel restricted in their flats. Michelle’s limited mobility and David’s fear of heights mean that both of them only leave the house when it’s necessary. This is not right. Everyone should be able to live in a home where they can leave and enter as they choose. Not somewhere that restricts them and limits their independence.

Tony said “there is a policy of take it or leave it”. This needs to change. The council, Housing Association and all other stakeholders involved should make more effort to make social housing a person-centred experience. They should take into account each person’s vulnerabilities and strengths. A house is a home and a place to build a life. Stability is not just important to Generate Voices members, but it is necessary for everyone to live happily. Every person should have the right to leave somewhere that they choose and feel safe. This should not be compromised and should be the most important factor when using social housing.

If you have enjoyed this week’s Generate Voices forum, then please join us next week!

Taking off our masks with Kieran Rose

Generate Voices talks about becoming a trustee!
Comments are closed.