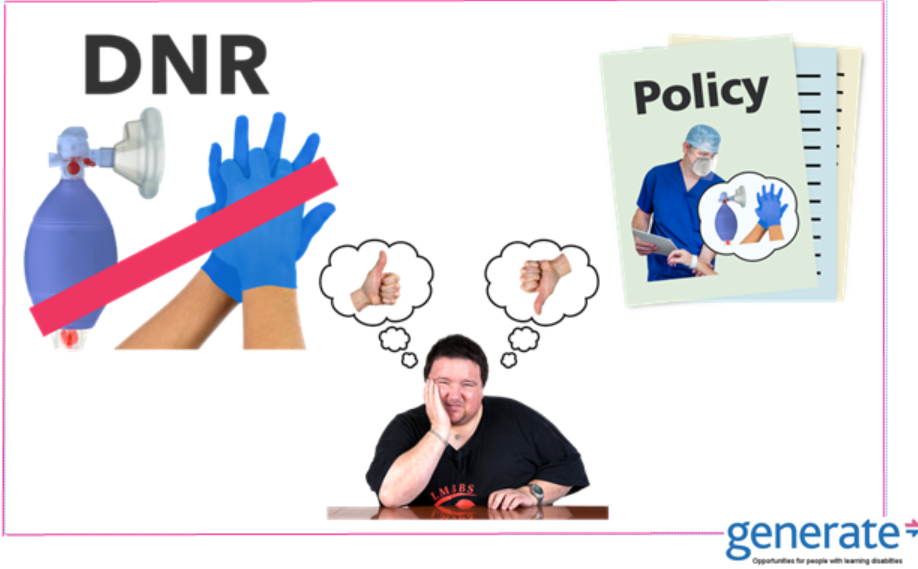 At our most recent Generate Voices Forum we were joined by Irene Tuffrey-Wijne, who works for the advocacy group Grassroots. Irene came to discuss the ‘do not resuscitate’ (DNR) order that is placed on certain people. First, Irene explained what DNR means. Do not resuscitate is a medical term used when a patient is old or too sick and the chances of resuscitation would not work. Unlike how resuscitation is portrayed in films and TV shows, the chances of surviving are quite low and so doctors sometimes put DNR on people’s medical records if they feel it is best for the patient. For example, attempts to resuscitate gives the heart an electric shock that is so hard it can sometimes break ribs and be very painful. Therefore, DNR is not necessarily the best decision for every person, especially those who are already very sick and frail. However, Covid-19 has changed this slightly. Doctors now are able to put DNR on patients medical documents without talking it through, and this has mostly affected elderly people but also people with learning disabilities. That means that in some cases when people with learning disabilities go to hospital their medical records can contain DNR, even though the person has not been consulted. Irene also explained how there are two different kinds of orders, the first is ‘do not resuscitate’ and the second is ‘do not attempt cardiopulmonary resuscitation’ (DNACPR). Whilst it may seem confusing, DNACPR means that doctors should not attempt resuscitation if they have a heart attack. On the other hand, DNR means do not resuscitate in any situation. For the Generate Voices Forum, this little difference is a big problem. Usually it is DNR that is written on medical records, that means doctors will not attempt resuscitation in any circumstances, which could lead to preventable deaths.

The Generate Voices Forum believes this is a problem; the DNR should be a choice for people who are otherwise healthy before they go into hospital. Whilst members agreed with the DNACPR being placed on sick and elderly people, they felt it was wrong to assume someone’s choice and to decide DNR for them. When asking the members about DNR many had not heard of the issue before and did not fully know what it meant. Stuart said the topic was confusing and that there is not enough information about it. Tony said he did not know much about it, but that his concern was that it is imposed on people with learning disabilities and goes against their human rights and right to life. David shared that DNR can make people anxious, upset and a bit unsteady. Terry also shared it’s scary as it means people do not know what will happen to them. Luis had never heard of DNR, but he said that “it sounds really wrong” and that is not right for other people to make those decisions. Luis expressed that it is a strong word and made him feel emotional. Tony agreed and argued that sometimes the decision can be made for the wrong reasons. More than that, Tony stated, “we should all have a choice”, which the group agreed is the most important issue.

The Generate Voices Forum feels this is an issue that needs to change. Members believe that the DNR should only be identified as DNACPR. In addition to this, members feel that doctors should talk to their patients, especially people with learning disabilities, to help them make an informed decision of what they want to do. Generate Voices members came to an understanding that, in some cases, the DNR is the right decision, but they agreed that it should be the choice of the person to make, not the doctor. All people should have a right to decide their own fate and people with learning disabilities are no different. The Generate Voices Forum feels the DNR order prevents people from making that choice themselves. This week’s meeting raised an important issue of ‘choice’ and who has the right to make certain decisions and how these can impact someone’s life. If you feel strongly about this issue too and would like to share your own experiences please join us at our next Generate Voices meeting!

“Love should not be labelled” – talking about LGBTQ+ rights at the Generate Voices Forum
Comments are closed.